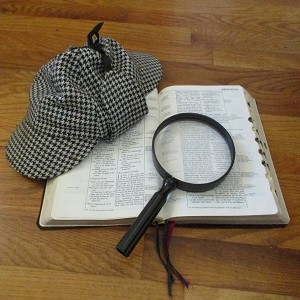 It’s not hard in itself, but we can make things difficult, if we’d like…

It’s possible to start at Genesis and read straight through to Revelation, and many try: mostly only once. Some insist there’s a better way, at least until we get familiar with all the Bible has to offer. We’ll hear many Bible stories in sermons, study groups, and Sunday school, but may never notice that there’s really only one, big Bible story.

It all fits together

It’s a lot like looking at the pieces of a picture puzzle. Some bits are interesting all by themselves, some just seem like visual clutter, and some clearly look like they probably fit together to make a bigger picture. Yet when they’re all fit completely together, everything matters, everything contributes to the picture, and all sorts of new spots pop out for us to examine. Even the pieces of noisy clutter show themselves as vivid detail.

The Bible is a library of ancient scrolls; God chose to provide it through different writers, living in different times and places. There’s overlap, there’s duplication, and in some places, the story has gaps. The curious among us can fill in with information from other sources, even though they’re not the Bible. They fit together, nicely.

It’s all been organized…

Over the centuries, scholars have broken the books into chapters and verses, and numbered everything. Then they arranged the individual books into groups, and  tried to put those groups into some rough chronological order.

The books themselves aren’t always completely chronological; the book of Jeremiah is fairly scrambled: something like a scrapbook. There’s a reason for that; the original copy was destroyed, the version given to us is a reconstruction with new parts added, and the book of Jeremiah itself explains why and contains the full account of the crazy times in which that book was written.

…but we can do more

We rarely hear of Jeremiah’s story, though it’s rich and fascinating, and has many lessons for us today. To read it, we’d have to skip around the book, also jumping into 2 Kings and 2 Chronicles. Some of the events in Jeremiah even intertwine with events in the earlier parts of Ezekiel. While the two prophets never mention one another, Ezekiel probably saw or heard of Jeremiah’s prophesying in Jerusalem, before Ezekiel went into exile.

While it sounds complicated, it all becomes clear when we read the Bible chronologically. It’s actually easy, and there are lots of resources that make it even easier.

Can you believe this?

There are audio Bibles, and while they won’t help us chronologically, they give something useful: the recording time for each book. We can add up all the minutes, and divide by the 365 days in a year. It won’t matter which audio Bible you check out; you could listen to the Bible in a year by taking just 12-13 minutes a day. That means if we read at the speed we speak, we could easily read the Bible in a year, committing only 12-13 minutes a day.

That’s probably not the best way to do it, but it does show how realistic it is to read through the Bible in the first place. And hey, if you run a little late, take longer; your Bible will patiently wait for you. Just don’t give up.

Building up a strategy…

You’ll want to take more than 12-13 minutes a day, though. Read carefully, and see what God’s Word has to say to you. Read with a good Bible handbook alongside, so you can read about the passages you’re studying for that day. These will give background and crucial historical context, and will help you understand things that you might miss.

There are also numerous lessons to be taught, that leave things unsaid because they were common knowledge back in the day, but not now. The first time we supplement our reading of each passage with reading about that passage will probably be filled with surprises.

…on top of strategies that have been built for you…

you’ll be presented with many, many alternatives. You can also buy a chronological Bible, but this commits us to a rigidly fixed study plan, and might be best tried after we understand the differences. To someone just starting out they’ll all look the same, and the differences may not matter to some of us. Understand that no chronological plan is perfect, and some will let you read large passages in one individual book before going somewhere else, while others will have you flipping back and forth a lot.

…and one strategy will fit you best

The advantage of lots of flipping is that the developing story becomes far clearer. (Personally, I prefer this, but that’s just me…) The disadvantage of all that flipping is, well, obvious. Depending on what you want, we can explain what to look for.

If you just want a basic picture of what’s in the Bible, then the “non-flipping” plans will probably suffice.  They’ll all tend to be laid out in daily readings, to go through the Bible in a year. For a non-flipping plan, each daily reading will be either in a single book, or occasionally in two different books. This will let you see a clear story, in much of the Bible.

Understand though, that while many of us can clearly tell the story of characters like David, or Paul, a lot fewer can tell the stories of Jeremiah, or Ezekiel, or the wonderful dynamic between Isaiah and king Hezekiah. Each has a wonderfully detailed story, though we’ll probably see them best if we use a plan that has us flipping around.

The flipping-around plans will sometimes stay placidly in a single book, but may occasionally have us galloping around in up to four different books each day. The really ambitious ones may even have us jumping back and forth.

The most important thing is to choose a plan you think you can follow, stick with it, and consider reading alongside a good Bible handbook. On your second time through, get a Bible atlas, and get familiar with the basic lay of the land. There will be many places where it’s just assumed that the reader knows what’s in the neighborhood.

Don’t be intimidated by all the detail; you’ve read your Bible just fine up ’till now, and you’ll continue to do so. Yet reading through the Bible once is often just the starting point. For many of us, it becomes part of our lives, taking just a tiny bit of daily study, but enriching us in marvelous ways.

We’re guessing that you’ll never be the same…